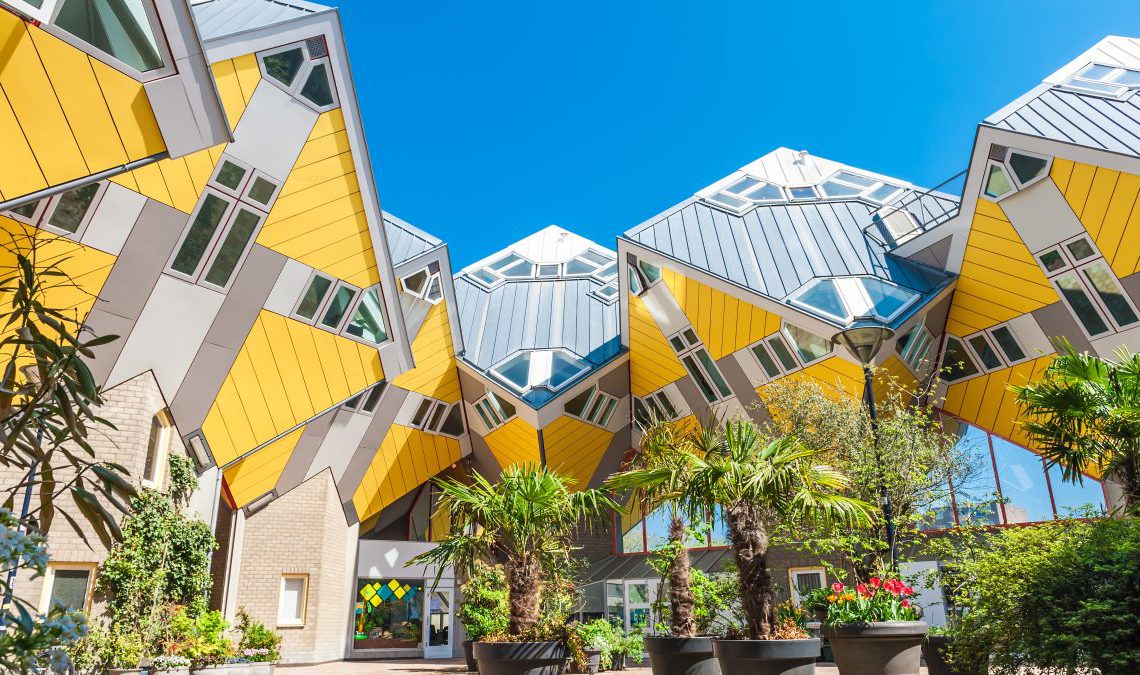 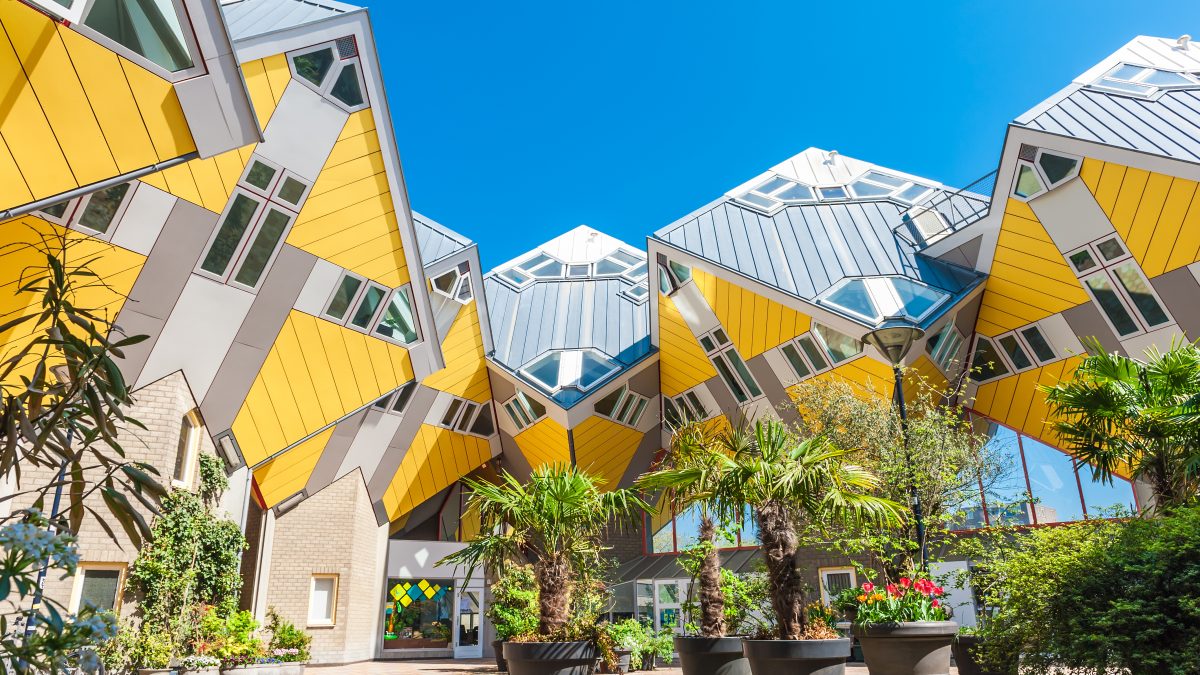 Rotterdam's rising skyline has become a symbol in the world of architecture and tourism; listed here are Rotterdam’s most intriguing architectural gems.

Besides being voted by Lonely Planet as one of the best cities to visit in 2020, Rotterdam continues to be hitting headlines for years as the city has regenerated into a hub of innovative and impressive architecture, as well as a centre for gourmet food and trendy cafes.

Its urban regeneration has gotten much international acclaim, as well as in 2020 Rotterdam was crowned the very best urbanized city in Europe through the Academy of Urbanism. The award is among five provided annually through the Academy to recognize the best, most enduring and many improved urban environments.

The Erasmusbrug is arguably the icon of Rotterdam's skyline connecting the southern and northern banks from the River Maas. It has been the setting of numerous spectacles, like the start of 2010 Tour de France, Red Bull Air races along with a DJ Ti”esto concert, and it has provided inspiration for photographers and filmmakers, including the Jackie Chan film Who Am I? Its graceful shape has earned it the nickname 'The Swan', inspired through the asymmetrical 139-m high pylon fastened by cables. It had been design by Dutch architect Ben van Berkel, and officially opened by Queen Beatrix in 1996.

The Erasmus Bridge links towards the up-and-coming Kop van Zuid area, Rotterdam’s old harbour district that has become a hot location with hip restaurants and bars.

Stepping out from Rotterdam's futuristic main train station may be the first manifestation of Rotterdam's radical break from traditional Dutch architecture. Its towering, angular entrance points in direction of Rotterdam's city centre. The spacious entrance hall using its linear, wooden interior sits alongside the station's original features, such as the train clock and station name. Light pours into the station through transparent walls along with a transparent roof over the train tracks, allowing visitors sweeping views of the entire complex and trains entering and leaving the station.

The varied light transmittance is because of different patterns on the roof's solar panels, that also make Rotterdam Centraal one of the largest rooftop solar projects in Europe.

This 'food mecca' is more than just a shopping and dining market. Markthal‘s towering curvaceous design by Rotterdam-based MVRDV is gracefully incongruous from the rising vertical lines of Rotterdam's urban centre, being bold for its colourful 11,000sqm ceiling mural that has been coined the Dutch version of the Sistine Chapel. Within the market sit luxury apartments in a horseshoe configuration, with glass panels allowing residents to view the game of some 100 stalls and 15 restaurants and bars below.

The Markthal includes the 'Tijdtrap', a totally free exhibition displaying the archaeological finds of mediaeval Rotterdam that were excavated throughout the building’s construction.

This 'vertical city' is becoming a legendary illustration of urban and innovative architecture since its inauguration in 2020. It had been awarded the very best Tall Building in Europe by the CTBUH (Council on Tall Buildings and concrete Habitat) and received nominations for that World Architecture Festival award and the Dutch real estate award, FGH. De Rotterdam‘s three linked towers reach nearly 150m high and cover a place roughly how big a football field. Having a construction section of some 160,000sqm, this building created by Rotterdam agency OMA and Rem Koolhaas, it's the largest building within the Netherlands.

The building name honours the ss Rotterdam steamship in the Holland America Line, which once sailed a regular route from the Wilhelminapier to New York. Restaurants and bars in De Rotterdam offer stunning views along the waterfront using its location on Rotterdam’s Maas River, and clad almost entirely in glass, its transparent facade brings the outside in.

On a clear day, you may be able to spot towers in Antwerp or even the Hague in the top, in addition to Rotterdam's famous landmarks like the Erasmus bridge, the port, the Feyenoord stadium and Hotel New York.

Step into Rotterdam's history only at that hotel that inhabits the previous hq from the Holland America Line, responsible for transporting a large number of hopeful emigrants to The united states. Today the nostalgia is encapsulated within the décor from the cast-iron staircase towards the trunks and pictures from past emigrants.

The Hotel Ny is a national heritage site in the trendy Kop van Zuid, offering stunning views from the rooftop terrace plus several restaurants and cafés for dining.

The White House was the Dutch answer to America's innovative architecture at the time. This 10-story building was created by architects Gerrit van der Schuijt, Herman van der Schuijt and Willem Molenbroek, influenced by New York's Art Nouveau style but retaining a conventional touch by utilizing stone rather than steel because the main building material. Completed in 1898, around 45m high it was an unprecedented height in Europe and regarded as Europe's first high-rise office building.

It was also mostly of the buildings to stay intact during war-time air bombing. On the floor floor, visitors can play for any coffee in the Grand Café Het Witte Huis.

This former tea, coffee and tobacco factory was designated a UNESCO World Heritage Site because of its exemplification of early 20th-century industrial architecture. The Van Nelle Factory is really a classic illustration of the Nieuwe Bouwen school of Dutch modernist architecture, designed by Brinkman and Van der Vlugt between 1927 and 1930. The running design created air, light and space because of its workers, and was in use like a tobacco factory until the 1990s.

Today it houses offices and event spaces, although tours are permitted two days each year: on the National Architecture Day in the last weekend in June, and on Open Monument Day in the second weekend of September.

Not all of Rotterdam's impressive architecture is modern. Amid the city's bold modernity sits Rotterdam's only example of late Gothic architecture, the Grote of Sint-Laurenskerk, originally constructed around the 15th century, and then restored in the 1950s after bomb damage. It originally sat around the banks of the River Rotte, and it is location can be classed as the birthplace of Rotterdam. Intends to demolish the building were rejected and also the rebuilding of Laurenskerk instead was a indication of the resilience of Rotterdam’s community. It houses one of the largest organs within the Netherlands, a unique copper choir screen from the 18th century, and bronze doors designed by Italian designer Manzù in 1968. Visitors can see the permanent exhibition 'A monument full of stories' (Een monument vol verhalen) or climb the tower for views of Rotterdam city.

Rotterdam's city hall (Stadhuis) is another illustration of architecture that survived the 1940 bombing raids. Located in Coolsingel, sculptures around the building tell a brief history of Rotterdam's history as a world port; spot the portier (doorman) and also the fiscus (tax collector), or even the stedenmaagd (urban virgin) that sits within the main entrance using the gilded genius met fakkel (spirit with torch). Visitors can see the town hall on a guided tour.

Rotterdam's rising city centre is not just about architecture. Combine architecture with world-class art within the striking building of Kunsthal or in the historic Museum Boijmans Van Beuningen, one of the oldest within the Netherlands. The Witte de Withstraat, sometimes referred to as Rotterdam’s 'Axis of Art', is another point of interest, running from Museumpark towards the Maritime Museum and lined with various cultural institutions and boutique shops, plus cafes and restaurants that create a vibrant night-life once the institutions close.

For theatre, the colourful red Nieuwe Luxor Theatre offers world-class productions, alongside interesting architecture and panoramic views from the River Maas from its rooftop terrace. Creative and jazz lovers should cross De Luchtsingel, the 390-metre-long wooden pedestrian bridge within the city centre, linking the Schieblock, an innovative meeting place, with Station Hofplein, the former station building that is now the place to find a number of restaurants, shops along with a jazz club.